The hum of innovation is taking hold in states across the nation, with many pouring funds into, or partnering with, incubator-style centers to spur ­economic ­development and ignite local job markets.

“Virginia is rich in cyberassets, whether you look at our military installations, our educational institutions or our workforce and veterans,” says Karen Jackson, secretary of technology. “We have the perfect set of puzzle pieces to put Virginia in a leadership position in cybersecurity and turn it into a powerhouse.”

Officials in Virginia want to differentiate the commonwealth as a cybersecurity R&D hub as well as attract emerging drone and self-driving car industries. To make that happen, the Old Dominion is investing heavily in education, infrastructure and even related startup companies.

That’s on top of an existing state-funded MACH37 business accelerator program that provides cybersecurity startups $50,000 in seed money and mentoring to launch their companies.

The commonwealth is also planting a stake in the unmanned systems market, providing multiple facilities for companies to use to test technology, including a new 3,000-foot runway for unmanned aerial vehicles (UAVs) and 70 miles of Virginia roads for automated vehicles.

Other states are following suit. In some, the state’s technology leaders are spearheading the effort while collaborating closely with state and regional economic development agencies. StateTech took a look at three states’ efforts — in Virginia, Colorado and Georgia — to share how their initiatives are evolving.

Their approaches may differ, but they share a goal: Woo outside tech companies to relocate or expand their operations in their respective states. Such forward-looking states are also focused on providing promising tech entrepreneurs and startups with the resources they need to thrive, from funding and critical IT infrastructure to introductions to prospective business partners.

States that invest in technology opportunities at home are poised for big payoffs. Colorado, for example, added 6,578 IT jobs in 2015, state officials say.

In fact, Colorado’s nearly 15,000 tech companies contributed to $19.9 billion in wages in 2015, accounting for 11.5 percent of Colorado’s overall economic output for the year, according to the Computing Technology Industry Association’s CyberStates 2016 report.

When Terry McAuliffe became Virginia’s governor in 2014, he sought to diversify the state’s economy beyond the defense industry, which has seen massive budget cuts in recent years. His teams focused on high-growth ­industries such as technology, Jackson says.

Virginia prioritizes cybersecurity because it currently has 17,000 open private-sector cybersecurity jobs that pay an average annual salary of $88,000. The state is concentrating on education to ensure current and future workforce demands can be met.

Last year, the state’s Department of Education held 32 summer cybercamps for high school students, where they worked on projects and were introduced to cybersecurity as a ­potential career.

This year, among the many cyber­security programs in the state budget, Virginia is launching a $1 million scholarship-for-service program, which will provide tuition to college students who promise to work for the state in a cyber-related field for a period of time after graduation. The state is also setting aside funding to help more community colleges and public universities become certified as National Security Agency “centers of excellence” in cybersecurity education. 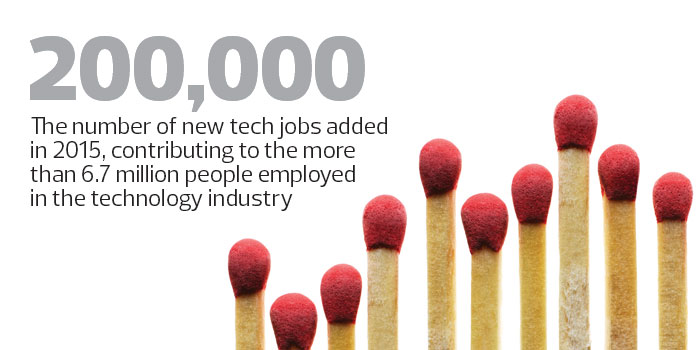 The commonwealth is beginning to see results. College enrollment in cybersecurity programs is rising, which will grow the state’s tech talent pool, Jackson says. “We are on a good path of developing the workforce that will keep and sustain the cyberindustry for decades to come,” she says.

The commonwealth is also investing in technology and infrastructure to cultivate the unmanned systems industry. In 2015, the state purchased mobile beyond-visual-line-of-site testing equipment for the Mid-Atlantic Aviation Partnership, a Federal Aviation Administration test site for UAVs that operates out of Virginia Tech in collaboration with Maryland and New Jersey.

Last year, the state also partnered with the Virginia Tech Transportation Institute and two companies to create the Virginia Automated Corridors, which will allow developers to test their automated vehicles on two tracks and on 70 miles of northern Virginia roads. Meanwhile, the state’s new runway at the Mid-Atlantic Space Port for UAV testing will be completed this fall.

Moving forward, Virginia is considering forming a Center for Excellence and a business accelerator program focused on unmanned systems. “We are looking to expand our statewide strategy,” Jackson says.

CIT CEO Ed Albrigo says it’s critical for the organization to invest in the startups and help them succeed.

“When you look at where economic growth comes from, almost all of the job creation comes from the entrepreneurial aspects of the economy,” he says. “We don’t expect every investment to pan out, but we do expect the overall portfolio to stimulate Virginia’s economy.”

In Colorado, the Governor’s Office of Information Technology (OIT) not only manages the state’s IT systems, but also works on boosting technology economic development in the state.

OIT supports activities to retain and grow existing tech companies in Colorado and assists the Office of Economic Development and International Trade (OEDIT) in its effort to attract outside IT companies to relocate or build new offices in the state, says Jonita LeRoy, Colorado’s senior IT economic development representative.

In fact, a Colorado delegation takes yearly economic development trips to northern California, Seattle and other parts of the country to strengthen its relationships with tech companies that have a significant or growing presence in the state.

“OIT takes the reins. We plan the agenda and make the contacts because we are already talking with these companies as vendors and partners of the state,” says Suma Nallapati, the state’s secretary of technology and CIO. Through the years, established Silicon Valley companies such as Google and HP have built a large presence in the state.

To retain and foster the growth of homegrown companies, Colorado has launched a grant program to assist entrepreneurs and businesses in seven high-growth industries that include technology and electronics.

The Advanced Industry Accelerator Grant Program, launched in 2013 and managed by OEDIT, so far has awarded 42 grants totaling $13.9 million, which has led to the creation of 135 new jobs. The grants require recipients to keep their companies in Colorado for three to five years. Twenty percent of awardees are technology companies, says LeRoy, who helps judge applicants.

“We found that for some companies to grow, some had to leave Colorado to get funding,” she says. “We are trying to keep the companies here, provide the funding they need and help them grow.”

On the other side of the country, Georgia has launched Centers of Innovation to accelerate the growth of six industries in the state: IT, aerospace, agribusiness, energy technology, logistics and manufacturing.

The centers, part of the state’s economic development department, connect Georgia companies, large and small, to resources they need, whether it’s a business partner or a university research team that helps them bring products to market, says Executive Director Steve Justice.

“We reach out to state government organizations and industry to bring resources together to help the companies, he says.

The organization occasionally provides small grants to help fund collaborative research projects between companies and universities, Justice says. Through the center’s efforts, for example, one Georgia-based UAV company, called Area-I, partnered with Middle Georgia State University to develop a UAV prototype. That work resulted in a contract with NASA.

“The grant project with Area-I has paid off tremendously,” Justice says. “Now, they’re adding new employees and getting more contracts.”