That tall order is a perfect fit for Army veteran Bob Bennett, who has led smart city initiatives for Kansas City, Mo., as its chief innovation officer since January 2015. A graduate of the U.S. Military Academy at West Point, Bennett had a 24-year military career that included service in Iraq as a battalion commander and also as an interagency coordinator, for which he wrote and implemented high-level threat strategies. He also served as chief of operations for U.S. Army Africa, running hundreds of annual military and humanitarian assistance operations.

Kansas City has already made great strides, including deployment of public Wi-Fi that covers an area of more than 50 square blocks, a zone built by Cisco Systems and Sprint. And things are only getting started, according to Bennett, who recently spoke with StateTech about the smart city movement and his community’s technology ambitions.

STATETECH: How do you see the smart city approach evolving in the years ahead?

Younger people, especially, expect to have these smart technologies in place. They’re 21st-century citizens, and they expect their city to have 21st- century capacity.

STATETECH: In making those advances a reality, what role does collaboration play?

BENNETT: We’re all in this together, and I think cities are committed to the idea that we will certainly hang separately if we don’t collaborate now. I learn every day from other cities. There are probably about 25 to 35 municipalities with chief innovation officers or people who do what I do for a living. We talk constantly.

Forming public-private partnerships also is important, and that’s something we do well here. We’re able to share the financial risk of these initiatives and set the conditions for our commercial partners to make a profit at the same time.

STATETECH: How does your military experience influence your work now?

BENNETT: In the Army, I often had to bring together groups that had potentially competing priorities. In Iraq, for example, it was the State Department and the U.S. Agency for International Development. We had shared objectives, but we also often had independent needs.

I envisioned those relationships in the context of a Venn diagram, with the goal of maximizing the space where we could pursue mutual objectives with a minimal allocation of resources, all achieving more in the process. My job was to figure out how to make the shared space in the Venn diagram as big as possible. 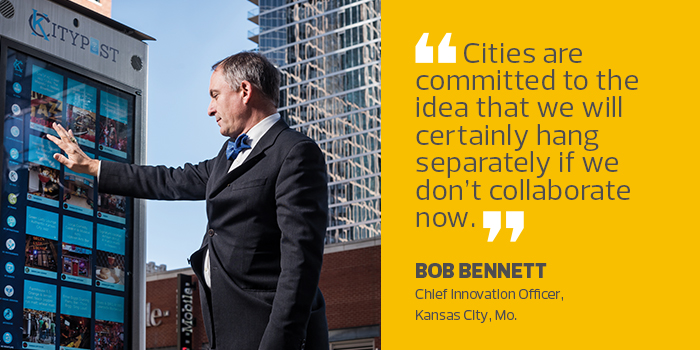 There is a similar dynamic with a smart city project. Private partners have to make a profit, while government organizations face budget constraints. Community action groups focus on business development for underserved areas experiencing a digital divide. There can be diverse interests, but also a shared objective of expanding access. It’s all about finding ways to maximize that shared space and take care of each other.

STATETECH: You mentioned the digital divide. Are smart city planners taking this into account?

Here in Kansas City, our smart approach includes the Digital Equity Strategic Plan, which requires annual reporting to our city council and encompasses all of our smart initiatives. It’s absolutely something that cities with populations above 500,000 need to consider because it affects so many citizens who do the hard work of our communities. You’re not a smart city unless you’re an inclusive city.

STATETECH: What’s the outlook for your city’s technology efforts?

BENNETT: We’re going to be the smartest city on planet Earth in five years. We are soon implementing a sevenfold increase in public Wi-Fi in the eastern third of our city. This will help us address some of those digital-divide concerns.

The next expansion soon after that will involve the water system, where we’ll deploy sensors through advanced metering infrastructure as we do life­cycle replacement of about 192,000 meters. When a meter is not reporting water use data back to the water department and customers, we can have its sensors provide traffic and air quality data. That would essentially create a 318-square-mile sensor mesh network.