When Harrison Newton was running the branch of the Washington, D.C., Department of Energy and Environment that deals with indoor environmental health, he would sometimes get frustrated. His team would often become aware of problems like children becoming sick with asthma due to where they were living. But the power to do something about those problems frequently resided elsewhere within the city’s bureaucracy.

“We, within the Department of Energy and Environment, were not the agency with the authorities to repair those conditions,” says Newton, D.C.’s deputy chief resiliency officer. “That could potentially rely on grants or programs from the Department of Housing and Community Development. It relied potentially on enforcement action by regulatory agencies.”

That need for cross-departmental action and coordination taught him a powerful lesson, Newton says: “The more connectivity between different parts of the city government there is around policy goals, the better the outcome for residents.”

It’s a lesson he now has the chance to apply in his role managing the city’s resilience strategy. The federal city was selected in 2016 by the Rockefeller Foundation to become part of its global network of 100 resilient cities around the world. Through its 100 Resilient Cities program, the foundation provides technical and financial support to the cities to develop and implement resilience strategies. These are plans to help adapt to and recover from both sudden major shocks, like extreme weather events or other disasters, and longer-term, chronic stresses such as climate change, economic inequality and technological transformation. Newton is at the forefront of those efforts.

D.C. Flooding Project Is an Example of Plan’s Holistic Approach

D.C. Mayor Muriel Bowser unveiled the city’s 160-page resilience strategy in April. Bowser’s involvement and commitment provides the leadership needed to ensure the necessary connectivity between different elements of the city government, Newton says. Newton’s office has only three staffers, and its role is mainly ensuring that existing city resources are properly aligned with policy goals.

One example is the strategy’s call for the development of what Newton calls “a world-class integrated dynamic flood model” — essentially a geospatial computer projection employing multiple data inputs. D.C. famously sits at the confluence point of two rivers, the Anacostia River and the Potomac River. But it is also just a few miles from the Chesapeake Bay estuary, and most of its downtown is at sea level. This creates the risk of three different kinds of flooding: from rivers overflowing, from sea levels rising and from rain falling.

The traditional static kind of flood plain map is therefore “a one-dimensional way of looking at a complex and dynamic issue,” Newton says.

“Understanding how our streets intersect — how our curb heights, our sewage system and these three types of flood risks all interact — is vital to really understanding which streets are likely to be open and passable” and which will flood given a specific set of weather conditions, Newton says. “A common tool” like the flood model will also improve collaboration among the city’s different stakeholders, he says — such as the D.C. Department of Transportation and the city’s water and sewage authority.

Dutch research institute Deltares is helping develop the model, which will be made public as part of the city’s efforts to educate residents about the impact of climate change — and, as the strategy puts it, “facilitate a data-driven response to climate risk and help prioritize climate adaptation investments.”

Many other cities are leveraging open data and geospatial technologies to drive better decision-making around a broad variety of challenges, explained Anna Friedman, a senior program manager at 100 Resilient Cities.

Cities are using this to address issues ranging from “inequality and fostering economic growth to public health and access to city resources,” she says.

The flood model is just one of the innovative ways the Resilient DC program is using technology to prepare the city for future shocks. Another is a pilot, spread out over the next four years at the St. Elizabeth’s campus in Southeast D.C., of a microgrid, a distributed power system that can be separated off — “islanded” — from the city’s electric network in the event of a major outage.

In addition to the federal Department of Homeland Security, the campus houses the city’s Office of Unified Communications, which runs the 311 phone system; the D.C. Homeland Security and Emergency Management Agency; and soon, a new hospital.

“You can understand the tremendous benefit of making that a secure site in terms of energy during a major outage,” Newton says. “We know that if there’s a major storm, if there’s a terror incident, that site is independent in terms of its energy supply.

“Resilience as a paradigm seeks ways to combat both stresses and shocks,” Newton adds. “We need initiatives that both reduce the stress and prepare for the shock.”

Another example of such a policy is the strategy’s call to train more D.C. residents in cybersecurity and to launch a cybersecurity corps to get high schoolers started on a cyber career path, Friedman says.

“It’s not just about securing the city’s networks — as crucial as that is, given cyberattacks we’ve seen recently,” Friedman says. “It’s also about using this as an opportunity to strengthen the city’s economy. Cybersecurity is a growing sector that will provide high-quality jobs well into the future.” 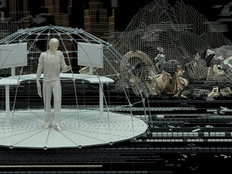