An aerial view of the Blue Plains Wastewater Treatment Plant, in Washington, D.C.

DC Water is not a typical municipal water treatment facility by any standard. The independent authority supplies 99 million gallons of fresh water every day for residents, workers and visitors in Washington, D.C., and its surrounding environs. It manages 1,300 miles of pipes and 1,800 miles of combined sanitary sewers that feed wastewater into its Blue Plains wastewater treatment facility, the largest in the world.

Tom Kuczynski, vice president of IT for District of Columbia Water and Sewer Authority, as DC Water is formally known, says that the infrastructure can be difficult to maintain, especially since some of the very old sewers are over 100 years old.

“We’re trying to figure out how to optimize service, improve the overall ability to serve and improve the customer experience, at a lower cost, while not adversely impacting the reliability of the system and ensuring the safe and reliable operating of the system,” he says.

DC Water has partnered with Microsoft to use cloud and artificial intelligence technologies to conduct predictive analytics on the water distribution system. That includes proactively identifying potential water main break scenarios and water quality challenges, as well as sewer overflows, according to Kuczynski. That way, he says, “we can proactively address them and avoid those incidents, rather than being reactive when a problem occurs.”

MORE FROM STATETECH: See how municipal utilities use the cloud to gain visibility and control costs.

Prior to working with Microsoft, DC Water developed a product internally in cooperation with its development partner Wipro known as Pipe Sleuth. The project began about a year and a half ago as a proof of concept, according to Kuczynski. It analyzes video footage of pipes captured by autonomous robots. The software then runs the footage through an AI-based neural network to detect pipe defects in the sewer system and provide a conditions assessment report. That information is then fed into DC Water’s investment models for repair and replacing infrastructure, so that the authority can better target pipes for upgrades.

Previously, such analysis was conducted via cameras that were manually lowered into sewers and operators watching closed-circuit TV footage to code and classify it. Engineers would then look at the video to detect defects in the pipes.

Pipe Sleuth can process the video in 10 percent of the time and cuts the cost substantially, down from $7 to $9 per linear foot to $2 to $3 per linear foot, according to Kuczynski. It also leads to a higher-quality inspection since the tool is able to detect more subtle defects and does not suffer from a fatigue factor the way a human operator might.

“It just runs,” Kuczynski says. “You get a higher detection rate on more subtle defects.”

DC Water also wants to license the solution to other water authorities and is in active discussions to do so, Kuczynski adds.

DC Water concluded that Microsoft’s Cognitive Toolkit was the best option to enable a predictive analytics capability. The authority reached out to Microsoft in late 2018 to do some proof of concept work around water quality monitoring, and that work has extended into predictive models for water main breaks and sewer flows, as well as pump performance and efficiency at the Blue Plains facility.

Kuczynski and several members of his team, along with an executive vice president of DC Water, spent two days in Redmond, Wash., at Microsoft’s headquarters to collaborate on models, build out the scope of work together and design the solutions.

DC Water is using a variety of Microsoft Cognitive Toolkit technologies, as well as Power BI, including AutoML capabilities within Power BI. The solutions run on Microsoft’s Azure cloud.

“It takes an investment on both sides,” says Kim Nelson, executive director of state and local government solutions at Microsoft. “In this case, it’s not like they went out and hired Microsoft the way you hire an engineering firm or a consultant to write code. We’re bringing our best resources together to work together to solve the problem.”

Nelson described DC Water as a forward-thinking agency that is “willing to take a few risks,” and adds that it’s a way for Microsoft to “demonstrate and get cutting-edge technology into the hands of people who are trying to solve real problems.” 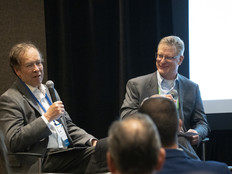