“We still struggle with what people see on TV and in movies and what they experience in real life,” Hoffman said Tuesday at the conference outside Washington. D.C. “Most people don’t take the time to understand how the operations of a city work.”

Municipal governments lag behind the private sector in technological capabilities, but people still have high expectations of cities to keep them informed of operations. Residents want to know exactly when cities will plow the streets or pick up the trash, panelists agreed.

“They are used to seeing their Uber count down toward them, but they don’t know where their school bus is,” Hoffman said.

To keep residents informed, smart city initiatives have embraced technologies to alert them, but cities also have sought ways to bridge the digital divide and conduct grassroots outreach.

Click the banner below to receive customized insights as an Insider on StateTech. 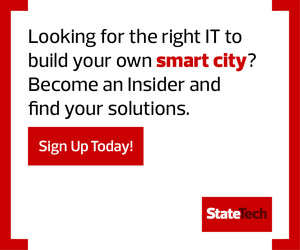 Residents Receive Data from the Internet of Things Through Phones

In Peachtree Corners, Ga., City Manager Brian Johnson described his community as one that embraces connected technology that informs citizens of urban operations through the Internet of Things. The goal, Johnson said, is to “create a magnet for activity.”

As a living laboratory, Peachtree Corners serves as a critical intermediate link between technologies developed in a closed lab environment and those deployed in a public space, Johnson said. Peachtree Corners centers on a technology park, where developers are running autonomous vehicles, connected vehicles and drones.

Those technologies communicate their status to citizens interacting with them through mobile devices and other alerts. Johnson said connected vehicles in Peachtree Corners may transmit data to traffic signals and light poles. Residents can access some of that data through their smartphones.

“We are not experts in some of these technologies,” Johnson said. “We are experts in maintaining and operating public right of way.” So, the city strives to facilitate the right of way for technology vendors that produce smart city solutions. For example, Peachtree Corners worked with T-Mobile to establish 5G broadband in areas of the city with the goal of communicating what works to the world at large.

Agencies Seek Means to Inform as Many People as Possible

Wayne Fenton, assistant director of solid waste management for Durham, N.C., outlined another goal that other city managers shared: serving as many people as possible. In the case of Durham’s Solid Waste Management Department, the city wants to serve the most households in the shortest time while missing fewer customers for trash pickup.

The city compiles customer feedback and informs drivers of frequently missed blocks to reduce any bypassed households. And trucks photograph curbs to orient drivers to locations.

Julia Murphy, deputy chief sustainability officer for San Antonio, Texas, said, “We try to deploy as much technology as we can to interface with people throughout the community.”

San Antonio established a sustainability dashboard online to provide residents with a visual representation of urban operations, but the city quickly recognized it had to do more to inform citizens.

“We realized that this was not fully accessible to everyone we were trying to reach,” she said. For example, visually impaired people could not examine the dashboard as originally envisioned.

San Antonio also faced challenges posed by the digital divide: Not every resident had internet access. To tackle those issues, the city engaged grassroots organizations with expertise in communicating with constituencies that may not have digital technologies.