After all, if you were given a choice to work in a slick, open-office environment with scooters and snacks in a vintage warehouse in the meatpacking district for some idealistic startup, or in a gray, traditional, cubicle farm for your local county, which would you choose?

Prince George’s County in Maryland has decided to take a different approach to its millennial IT talent problem. Instead of trying to attract millennials to its offices, the county is incubating and grooming them in-house with its internship program, Tech Prince George’s.

“We set out to connect with the next generation, the youth that’s going to come in and run IT at some point,” says Sandra Longs, IT training director for the county. “We try to go out and get the IT talent, to use the technology with some of the vexing problems confronting Prince George’s County, and those issues include low-income, foreclosure homes, health issues, high dropout rates in schools and poor test scores.”

Tech Prince George’s is a collaborative initiative with the county’s IT department, public school system, local colleges and private-sector partners. By engaging students and starting the conversation about professional opportunities in technology at an earlier stage, Prince George’s County hopes to build its own pipeline and not just attract existing IT talent to its county. 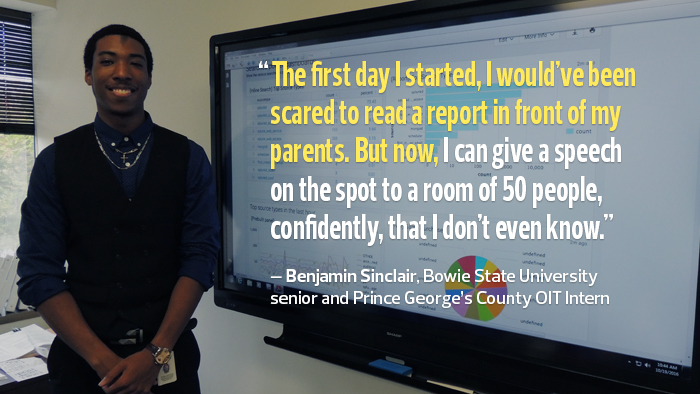 Creating an IT Talent Pipeline

Meet Benjamin Sinclair. He’s a senior and a computer science technology major at Bowie State University. After spending the summer with Prince George’s County’s Office of Information Technology Summer Youth Enrichment Program, he has been offered an extended internship and has been given the opportunity to lead the implementation of a solution from Splunk, a Big Data software provider.

By offering young people meaningful and real-world project work like this, Longs and the county hope to demonstrate to other millennial IT professionals that by working with local governments, they can take on work that is far more meaningful than a typical internship where they might fetch coffee and do menial tasks.

For Sinclair, there’s the added bonus of hometown pride.

Sinclair’s project will focus on leveraging Splunk’s tools to provide the county with more in-depth log data. Because there is so much activity that is logged, it’s difficult for the county’s IT workers to track and analyze it all, but looking at log data holistically can aid in diagnosing problems and preventing data breaches.

“We have various systems that are logging, and they’re typically embedded in different groups,” says Jayson Loveless, an enterprise architect for the county and one of Sinclair’s mentors. “The reason we’re looking at Splunk is to tie those different functional areas and groups together at a higher level, so that we can correlate across the agency and county, specifically for IT operations.”

The major use case for Splunk is security, a top priority for Prince George’s County — no surprise, given the county’s proximity to the nation’s capital and the seat of the federal government, where cybersecurity is top of mind.

“I’ll be collecting data logs from each device, and we’ll be looking at the network for security purposes,” says Sinclair. “Let’s say somebody logs in as Ms. Sandra, after she has clocked out during normal hours when she should be at home. Right now, we have a lot of logs on a lot of different systems, and it would take a lot of time and a lot of manpower to not only locate where the problem was, but also what time and what the problem was.”

While tracking and monitoring log data may seem like low-hanging fruit, it’s often the minor tasks and details like this that get glossed over and lead to breaches.

“The great thing with Splunk is you can implement gigabytes of data from months before, and with that data, you can narrow down what device, the hour, to the precise second, of where the error occurred, and also it gives you a visual dashboard so you can look at graphs and pie charts to help improve security,” says Sinclair.

Beyond Splunk, the county is planning a lot more investment in cybersecurity in the near future.

“I think you’ll see, within our IT investments over the last 12 to 18 months, the biggest focus has been on security,” says Loveless. “Whether it be Splunk to assist with analytics and events, or other platforms that increase our security here in Prince George’s County, such as network access control and next-gen firewalls, there’s been a lot of investment in those areas.” 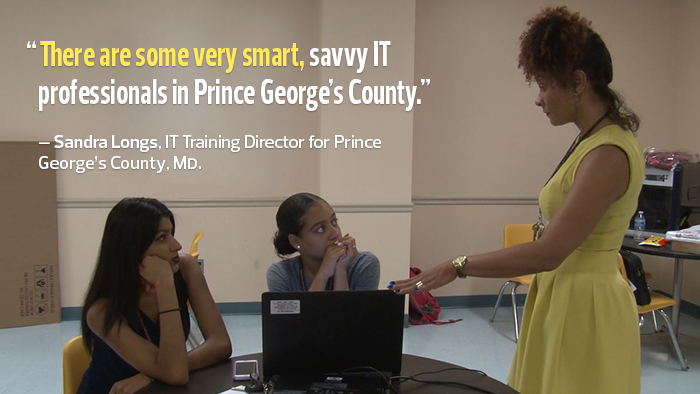 While most internships offer training and advice on developing and honing discipline-specific skills, Longs and the county strive to develop and groom their interns’ soft skills as much as their hard skills.

For Sinclair, the leadership training has had as much, if not more, of an impact than the technical training.

“I’ve grown tremendously working under Mr. Loveless and Ms. Longs, as well as others, but definitely my leadership skills have grown tremendously,” he says. “The first day I started, I would’ve been scared to read a report in front of my parents. But now, I can give a speech on the spot to a room of 50 people, confidently, that I don’t even know.”

If Prince George’s County’s approach to internship and young professional training in IT pays off in the long run, it can hopefully shift perceptions about the county and get young people to realize that they don’t have to move to Silicon Valley or Manhattan to do challenging and rewarding IT work.