On the first Saturday of May, hundreds of thousands of spectators clad in extravagant hats pour into the city of Louisville, Ky., to witness the greatest two minutes in sports: the Kentucky Derby.

“The Kentucky Derby and Louisville are so intertwined, and they’ve had such a long history together, that it’s impossible to separate out the two. And it’s its own kind of cultural identity,” Grace Simrall, chief of civic innovation for Louisville Metro Government, tells StateTech.

While the contest is deeply steeped in tradition, from its lavish and wide-brimmed headwear to its cocktails — more than 120,000 mint juleps will be served over the two-day period — the government has ensured that the technology underlying the hosting of the 143rd Kentucky Derby is more than up to speed.

“As time has gone on, our number of visitors who come to our city to participate in the Kentucky Derby Festival has only increased. But that means we need to be a bit more sophisticated or leverage technologies to be able to accommodate these increased crowds,” Simrall says.

For this reason, the city is turning to video coverage to monitor crowd safety and open data collected through ongoing smart-city initiatives to improve traffic — artificial intelligence is even getting in on the betting action.

Over the course of two days, more than 270,000 people will flood into Churchill Downs for the event, says Lt. Tim Burkett of the Louisville Metro Police Department.

To keep the crowds safe during the event, the police department has implemented several pieces of new and innovative technologies for its Real Time Crime Center, with the centerpiece being its video surveillance of the city.

“We have roughly between 180 and 190 cameras throughout the city. And most of those are in public areas, along public roadways and public parks,” says Jennifer Corum, director of the city’s Real Time Crime Center.

“We map pretty much every permitted construction in the city. We map special events closures. And so, as [you are] driving you’re going to see a lot of things pop up to notify citizens that the road’s not necessarily completely closed, but watch out, there’s probably construction on the road,” says Phil Gardner, the geographic information systems supervisor for the city’s Department of Public Works.

“The smart city itself as a system will be wired with sensors, monitoring everything from traffic to sustainability to safety. And it requires some underlying fundamental infrastructure to really make it work,” says Simrall. “We’re just standing at the forefront. We have nothing but a wide-open horizon in front of us.”

The crowd looking on the Kentucky Derby. Photo courtesy of Churchill Downs. 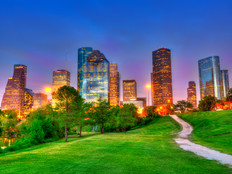 What Will Remote Government Work Look Like Over the Long Term?