“They would tell us that they didn’t have transportation, that they couldn’t take off work for a full day, that they didn’t have the funds,” says Suleima Salgado, director of telehealth, telemedicine and rural health initiatives for the state’s department of public health. “Our providers work with a very high-poverty population, and many live in rural counties. There aren’t a lot of specialty providers in those communities. We were seeing that some of our patients who lived in southwest Georgia or northeast Georgia were commuting an hour to five hours to get to a specialty appointment.”

But Georgia turned that situation around, and authorities built an extensive telehealth network that reversed trends that concerned experts by providing expertise remotely across the state through video.

“We have 25 specialty services that we didn’t have prior to implementing this network,” Salgado says. “That’s a huge victory for us.” 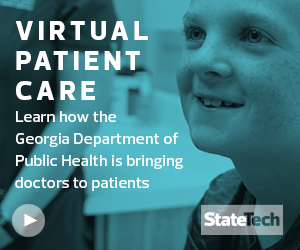 While states are still sorting out policies around insurance reimbursements and practice standards related to telehealth, there is nevertheless a growing consensus that the practice is needed to help improve access to care. Around the country, state health organizations see improvements in health trends in places without ready access to specialized care thanks to bridging that divide with telemedicine solutions.

“A lot of what’s driving the policy is concern around provider shortages, particularly in rural areas,” says Kate Blackman, health program group director for the National Conference of State Legislatures. “Generally, the movement we see is toward broadening the types of providers that could be eligible for reimbursement. If there’s any place where I’d say there’s consensus, it’s around enabling broader access.”

MORE FROM STATETECH: Find out how Chattanooga's broadband investment opens the door to telehealth.

How to Effectively Deploy Telehealth Solutions

Building a statewide telehealth network is no small task, and the Georgia Department of Health relies on $2.4 million in annual state funding dedicated to telehealth to maintain the program. The department utilizes a hub-and-spoke model for its network, and it installed dedicated circuits throughout the state to ensure that clinics had the bandwidth necessary to support telehealth solutions.

By 2016, Georgia connected all 159 of its counties via the telehealth network. Today, patients come to county health centers for telehealth visits, where nurses act as the hands, eyes and ears for physicians on the other end of the screen. The department has approximately 40 physicians in its network, with access to 400 more, and it is providing a number of new services, such as dentistry, that the state previously lacked the resources to support.

“We had to do all of it from scratch,” Salgado says. “We adopted a phased approach, district by district, and it took a couple of years.”

To spend four or five hours to get to a 15- or 20-minute appointment was a lot. Knowing that they have the opportunity for follow-up via telemedicine changes a lot for some of these patients."

The state purchased telemedicine carts from Avizia, and it utilizes Cisco Systems videoconferencing equipment, including SX10 and SX20 telepresence units. Care providers throughout the state can call a central help desk if they’re having issues with the technology, and the DPH also uses software from SolarWinds to monitor network performance.

“We monitor each and every location,” says Roger Bunch, an IT manager for the department’s telehealth network. “If a site goes down, I know about it, and we know to reach out to them.”

“It also takes a lot of time to train and work with our physicians and our specialists to help them understand how to use the platform,” Salgado says. “Once they begin utilizing the platform, they really enjoy it, but first we go onsite and do hands-on training.”

Alabama Builds Its Own Telehealth Solution

The Alabama Department of Public Health, which built out a statewide telehealth network along with partners including the University of Alabama’s University Medical Center, relies on federal grant money for much of its equipment. The state deployed its first telehealth cart in 2015, and now it has telehealth equipment at 53 county sites, says Michael Smith, director for the department’s office of telehealth.

Rather than purchasing prebuilt equipment, Smith’s department assembles its own custom carts using Cisco SX10 telepresence units, Bluetooth-enabled stethoscopes and other technologies. “Because of that internal expertise, we’ve been able to buy the components and put them together,” Smith says. “As a result, we’ve been able to deploy significantly more carts than we anticipated.”

Smith says that 62 out of Alabama’s 67 counties are classified as Primary Care Health Professional Shortage Areas, reflecting challenges in access to care throughout the state. And he says that 90 to 95 percent of patients express satisfaction with the state’s telehealth solutions. “With the advancements in telecommunications, we have an opportunity to seize a new day and provide greater services for people in our jurisdiction,” he says.

The portion of telehealth use dedicated to psychiatry

State healthcare providers are using all types of tech to adapt to meet the challenges of current health crises. Facing an opoid crisis, for example, the Kentucky Rural Healthcare Information Organization assists healthcare providers in the state with telehealth implementations. Among other use cases, patients are using the technology to connect with behavioral health specialists. “Right now, there are so many opportunities to help those suffering from opioid addiction though telehealth consultations,” says Scott Lilley, executive director of the organization.

“In our region, access to behavioral care is very limited,” adds Nicole Winkleman, telehealth director for the organization. “Clinics have had a really good response from patients who enjoy the format and the ability to have access to those professionals. There just aren’t enough providers to go around for the number of people who need counseling services.”

In Georgia, telehealth helps provide pediatric dental services in schools. Onsite hygienists perform cleanings and deliver education, then take X-rays that are reviewed in real time by a remote dentist. The state also contracts with a pediatric geneticist — one of only 12 in all of Georgia — to treat children with genetic disorders. The state is seeing a decrease in infant mortality rates in areas where telehealth solutions are providing care options to women who might otherwise go largely untreated during their pregnancies.

Telehealth in Action in State Government

Organizations other than state and local agencies are adopting telehealth initiatives. Here are some notable telehealth programs around the country.

Mississippi: The University of Mississippi Medical Center created the Mississippi Diabetes Telehealth Network to provide remote care to diabetes patients. In a pilot program, participants took and reported their own vital signs daily, and practitioners contacted them if they failed to check in or if they reported metrics outside of an acceptable range. Over six months, none of the 100 participants was hospitalized, and 96 percent took their medications as directed.

Utah: The Intermountain Healthcare system, based in Salt Lake City, launched over 35 telehealth initiatives, which have resulted in lower mortality risks among the system’s patient population. The system’s neonatal telehealth program has allowed at least 50 babies to stay in their communities instead of being transferred to a larger facility, resulting in a $1 million savings.