Smart transportation systems are one of the seven key categories of city infrastructure that can be made intelligent in smart cities. Yet what does it mean for a city to actually deploy an IoT sensor network and smart transportation system, especially for traffic management? And what kind of benefits will cities get if they do make such an IT investment?

Internet of Things sensors for traffic management have a large impact on improving traffic flows and reducing congestion and pollution, all of which improve quality of life, resident safety and have the potential to boost economic activity and productivity. Such sensors can also improve pedestrian safety and save lives, as Portland, Ore., and many other cities hope to do.

Importantly, IoT traffic sensors are not hugely expensive, especially when compared to the amount spent on other smart city technologies, including software, data analytics and IT services.

Mark Zannoni, research director of smart cities and transportation at IDC Government Insights, says that it is difficult to quantify the return on investment of IoT traffic sensors precisely, “but the values seem to be greater in the benefits to it vs. the costs of implementing” them. 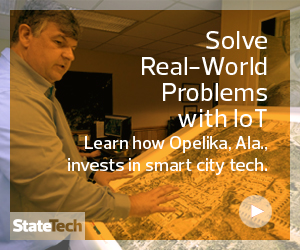 How to Build an IoT Sensor Network for Traffic Management

The way a city should construct an IoT sensor network for traffic management and collect IoT sensor data depends heavily on the approach it wants to take with the technology and that data. For example, the sensors could support IP-connected cameras for traffic monitoring, or might communicate with connected vehicles for public safety purposes, like license plate recognition. Cities also need to realize that if they deploy IoT sensors for traffic management to one part of the city and improve traffic there, it may just mean that traffic has shifted to other parts of the city’s street grid.

In general, Zannoni says, cities want to deploy as little hardware as possible and then use software to make adjustments. Sometimes, cameras are locked into one purpose and cannot be used for another. Therefore, cities should have a “holistic approach to their IoT strategy,” Zannoni says, such that cameras can be used for multiple purposes, which is both more aesthetically pleasing since it avoids two cameras at an intersection and more cost effective.

The software cities are using for IoT sensors for traffic management should also be configurable with the hardware they are purchasing, according to Zannoni.

When constructing such IoT sensor networks, and determining where to place sensors, cities should consider the growth of the city and which parts of the city need more traffic monitoring. For example, if there is a new downtown area that is being developed, cities may want to place sensors there so that traffic flows smoothly. Adding in such sensors and new technologies can also incentivize more development.

If cities want to combine smart parking with their traffic management system, they should place sensors where they are adding parking, Zannoni adds. And if cities are using the cameras for policing, they could be combined with acoustic sensors to detect gunshots and track shootings.

In terms of IT infrastructure needed, the software cities use to manage the cameras and sensors needs to work with all of the hardware components, and cities need to be able to get access to the data they are producing in real time. If the cameras produce footage that is highly detailed, cities can see how many people jump out of the way of passing cars, for example.

If cities can do that, Zannoni says, they can calculate events like near-misses with pedestrians and determine which areas of the city are high-accident areas. They can then reconfigure intersections or change the timing of lights to improve safety, and can do that more quickly, rather than making changes and waiting a year or two to see how many accidents occur. Or, if there are more accidents at night, cities can improve street lighting to make both cars and pedestrians more visible.

All of that relies on having a robust city network with enough bandwidth that can reliably transmit large, high-resolution video and image files in real time. For applications that require microsecond responses and low latency, cities should consider deploying 5G wireless networks, which the major wireless carriers are going to begin deploying in cities in 2019.

Vehicle loop detectors, also known as inductive-loop traffic detectors or magnetometers, are an electromagnetic communication or detection system that uses a moving magnet or an alternating current to induce an electric current in a nearby wire. In the context of smart traffic management, these are metal plates embedded in city streets that can detect when vehicles pass over them.

Zannoni notes that vehicle loop detectors are used to detect if a car is present at a particular spot at an intersection or in the flow of traffic. They will tell cities if one car is present, but would not be able to detect if there is a backup of 10 or 100 cars. Therefore, cities should not rely on them to dynamically change traffic lights for special events or unique circumstances the way they could, in theory, with footage from connected cameras, Zannoni notes.

Cities may use vehicle loop detectors in parking garages or in parking spots to detect if a car is parked in a particular spot. That information can be fed into smart parking mobile applications to let residents know where available parking spots are.

MORE FROM STATETECH: These are the things that become “smart”  in a smart city.

The Benefits of IoT Sensor Networks for Traffic Management

There are numerous potential benefits to enhanced traffic management. The most obvious is that, by dynamically and intelligently controlling traffic flows based on real-time conditions, cities can decrease the amount of vehicle congestion in their streets, Zannoni says. That decreases the amount of time residents spend idling in traffic, decreases carbon dioxide emissions that cause climate change, and improves air quality for residents.

For example, according to IoT Revolution World, in New York City, the average driver spends 107 hours per year searching for a parking spot, adding up to $2,243 in costs to the driver and $4.3 billion to the city. With IoT sensors that can quickly identify where empty spaces are, New York and other cities can save a lot of money and cut tons of carbon dioxide emissions every year.

Those benefits can have spillover effects, Zannoni said. For example, cities may come to be seen as more economically competitive. Businesses that can locate in numerous cities may decide not to move to a city or set up a headquarters there if it is a city that is known for traffic.

City streets that are less congested also allow police cars, fire engines and ambulances through more quickly, which can save lives.

Zannoni says that IoT sensors networks for traffic management and smart transportation are complex, so it is difficult to calculate an ROI. Cameras may cost $2,000 to $3,000 each, but the software platform needed to analyze the data from the cameras is likely going to be significantly more expensive. It is also difficult to calculate whether a company has moved to a city just because of improved traffic patterns, Zannoni says, making it more difficult still to attribute the resulting economic activity and tax revenue to traffic management. However, he says, in the end, the benefits seem to outweigh the costs.